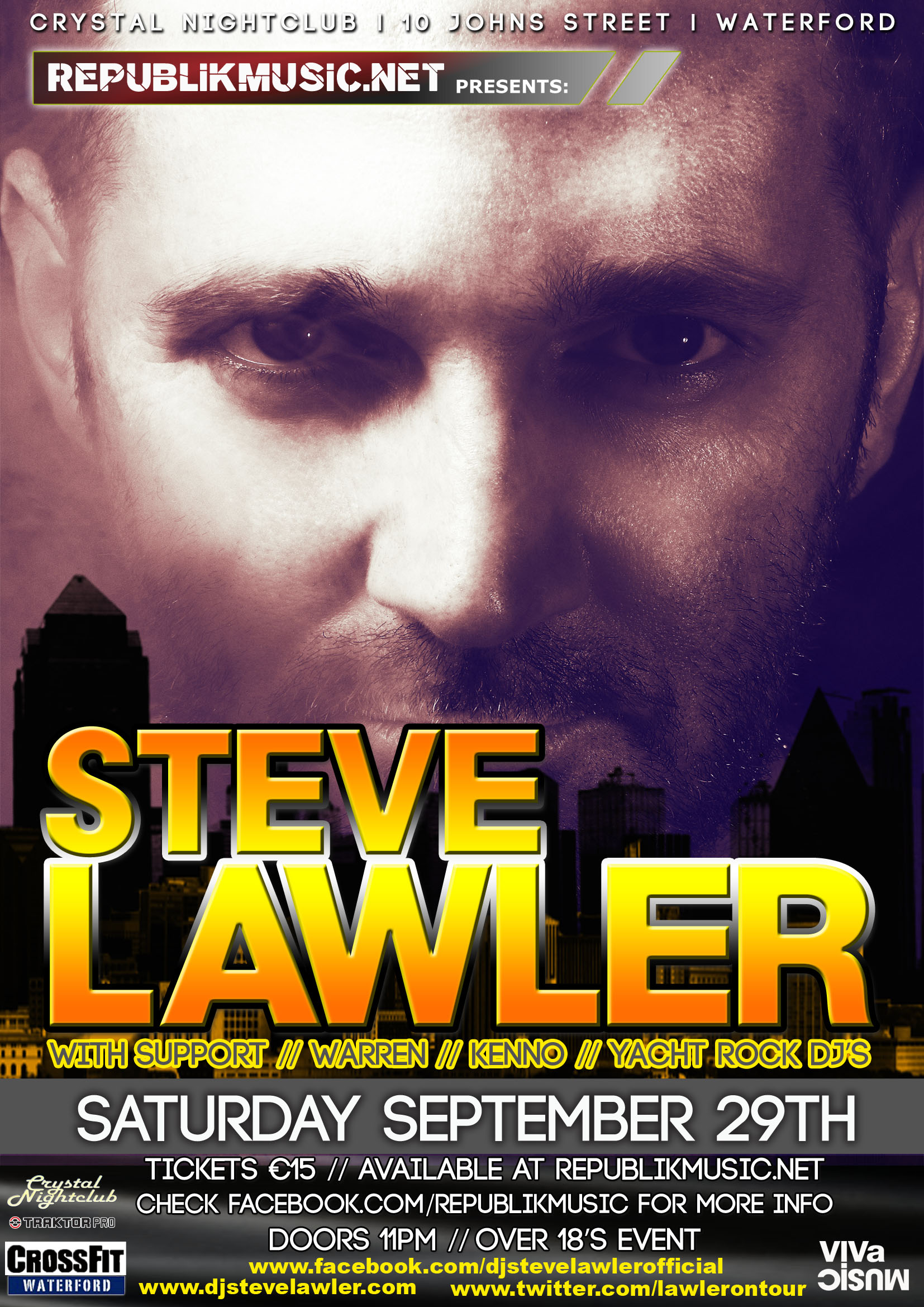 Re:Publik are delighted to present one of the biggest DJs in the world at Crystal Niteclub, STEVE LAWLER (Viva Music) Saturday September 29th. The legendary Steve Lawler who is a long term Space resident and now running his own weekly club night in Ibiza at new club Sankeys. Viva Warriors in its first season in Ibiza has seen the return to the smaller, more intimate club feel that is Sankeys is renowned for. Steve is weekly resident at Warriors with guests like Derrick Carter, Steve Bug & Sascha Dive to nam
e a few. Steve still plays at the major festivals over the globe & he will finally makes his debut for Re:Publik..

Steve Lawler Biog:
Steve Lawler needs no introduction, but he certainly warrants one. You would be hard pushed to ﬁnd a more in-form, in-demand, exceptionally talented artist, regarded as highly by his industry peers as he is by his huge global base of musically educated fans.

Steve Lawler, a child of the acid house generation, has been busy with the beats long before genres were but a twinkle in clublandʼs eye. An electronic artist who deﬁes generic boundaries, ever since his days organising the infamous motor way raves back in the early 90ʻs underneath the M42 motor way, in the UK.

As an artist: his releases & remixes have been signed by some of the worlds most established recording labels; R&S Records, Systematic, Drumcode, Harthouse, Cocoon, MBF, OVUM, Sci+Tec, Tsuba, Souvenir, Rekids, Boxer Sport, Be As One, Monique, Kostbar, Soma, Skint and of course his own recording label VIVa MUSiC.

As a Label Manager: Steveʼs label VIVa MUSiC (founded in 2006), has quickly earned a reputation for breaking new talent and has featured tracks by such artists as Reboot, Audioﬂy, Jamie Jones, Davide Squillace, Luca Bacchetti, Bushwacka, Livio & Roby, Leon, Plasmik, Ripperton, Ilario Alicante, Tiefschwarz and of course Lawler himself, amongst many others and receives heavy patronage by many House & Techno luminaries. As for A&R, just ask artists like Simon Baker & Leon and theyʼll tell you all about the support, encouragement and opportunities Lawler has given them.

VIVa MUSiC works as a culmination of everything thatʼs gone before; from the putting on of the aforementioned illegal raves, to his residency at super club Cream back in the mid 90ʼs. Heʼs remixed high proﬁle artists such as Jamelia, Dido and Justin Timberlake and worked with many of the worlds renowned dance imprints. As well as recording a track for the blockbuster horror movie by Ian Softly ʻThe Skeleton Keyʼ. Heʼs released some of the industryʼs most collectable mix series such as the ʻDark Drumsʼ, ʻLights Outʼ and, most recently, the ʻVIVaʼ series. Now on its 3rd release. The ʻVIVaʼ series has revealed Steveʼs widescreen vision better than any mix before with down tempo and deep house playing a big part in the beat blend. Steve held a triumphant residency for nine years at the Balearic club Space in Ibiza (a club he returned back to in 2008). His VIVa Nights residency where Steve played from doors open to door close at The End in London consistently sold out for its 7 years span and his residency at Londonʼs Home Club was one of the infamous venueʼs only success stories.

Dynamic, driven and drastically obsessed with performing as well as he possibly can Steveʼs passion for House, Techno and Electronica is too strong for one simple generic association, and right now his message is louder than ever. 18 years deep and Steve Lawler isnʼt just at the top of his game, heʼs pushing the boundaries of what a DJ can do, both technically and creatively, as an artist and as a successful label businessman.